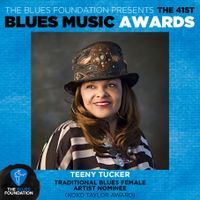 Please welcome Columbus Ohio Queen of the Blues, Teeny Tucker back to Natalie’s Music Hall which is conveniently located in Grandview at 945 King Ave in C-Bus. Teeny’s rhythm section of Hughes, Hall, and Denney, will be on hand as well as some other amazing featured “guests.”

One of the “highlights” of Teeny’s performance will mark the very first “live” performance of the song which she inspired, and help write. The song “All Out of Tears,” was awarded “Blues Song of the Year” (2022) by the Blues Foundation of Memphis Tennessee. The song is dedicated to the life, and loss, of her only Son. This will certainly be an incredible, amazing moment in time.

Teeny Tucker is always excited to deliver her Fun, Fresh, and Fascinating show! She has been declared one of the most gifted, vibrant, stimulating and imaginative personalities on the Blues scene today. She has an exquisite voice, strong and soulful, and singing straight from her heart.

Teeny is known to immediately connect with the audience, and create considerable “crowd frenzy” wherever she appears. She will have the crowd on their feet, cheering, laughing, crying, and applauding her amazing undeniable “real-deal” talent. 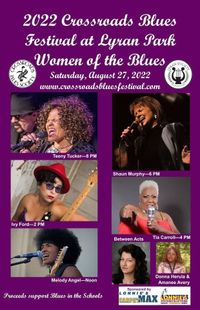 CROSSROADS BLUES FESTIVAL - WOMEN OF THE BLUES -- The 13th Annual Crossroads Blues Festival at Lyran Park returns for 2022 and features Women of the Blues as it's theme. Five great acts on the main stage and two super local acts will appear in the Pavilion in between the Main Stage events. Here is our schedule of events for August 27, 2022:

​Tickets are on sale and advanced tickets are $10; entry at the gate is $15. No coolers or outside food and beverages are allowed and no pets, please. A wide assortment of beer and wine will be available at $5 and great foods will be served up and available!

elebrate Ohio’s Freshwater Shrimp Harvest! Get your fill of mouth-watering seafood selections while enjoying a live music stage, multiple vendors, games and activities for the whole family. Explore live displays of fish, frogs, turtles and other native critters. Swing by the fish farm market for a taste of gourmet smoked trout products. Sample some of Feisty Meads most popular meads at the bar. Participate in the Trout Feeding Frenzy, sand castle play zone and our famous sturgeon pool, where you can pet Ohio’s largest native fish. Take home a souvenir t-shirt and enjoy the country atmosphere at the farm! Freshly harvested shrimp will be for sale beginning Saturday morning on Saturday, September 17th.